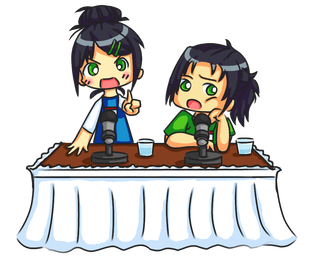 Costumes, Cosplay, and Character
Wearing a costume can be more than just putting on a fancy outfit. It gives you the opportunity to truly inhabit the life of a character. By researching what was worn by your character you can learn a lot about who that person is or was. Learn how you can find greater depth in your cosplay or role play through costuming!

Drawing Mrs. Brisby: The Animation Career of Don Bluth
These days the fandom is pretty insistent on pushing for quality shows to be in the limelight.  The newest season of Attack on Titan? Great.  Frozen? Goody. Between the anime scene and the Walt Disney Co., it’s no surprise that a number of American animators are overlooked in the recitation of people’s favorite animated works. Join us for an explorative discussion of the man who did for America what Miyazaki did for anime. [A Manly Battleships® Production]

Knotz Your Every Day Dubbing Panel
Soooooo you think dubbing is easy huh? Why not give it a shot and try it on for size? See if you can follow those beeps, take direction, create a voice, sound like you’re real, not reading off of a page, ACT, and give a fabulous, stupendous performance! We’re going to take one of my favorite Anime shows that I’ve worked on (no not Pokémon, sorry, LOL) and see if you can dub like the pros! Think you can handle it? There may be a prize in it for you if you can!

Cartoons of the 80s & 90s: Greatest Hits & Other Strangeness
Join comic artist, humorist, and cartoon connoisseur Kevin Bolk as inflicts clips from some of the best, worst, and most obscure cartoons from his vast and eclectic VHS collection on your senses. If you’ve seen this previous years, you’ll relive some returning favorites plus a few new segments fortified with trivia, Fruit Loops, synth-pop, and the vengeful souls of a thousand Korean animators. You will believe that dinosaurs can shoot lazer beams.

Super Sonic Quiz-Ball
Test your knowledge of Sonic the Hedgehog and his speedy friends. Win prizes for questions on the Games, Comics, Music, and Anime; but beware of Eggman's dangerous traps!

Copic Mechanisms: The Magical World of Copic Marker
Copic makes the highest quality markers in the world. Developed for, and widely adopted by, the Japanese manga industry, Copic markers are now preferred by everyone from professionals to enthusiasts. Designed for a lifetime of use, you only need to buy a Copic marker once. Copic markers are ideal for all styles of art, design, illustration and crafts. Artist Kevin Bolk presents a how-to workshop for Copic fans of all skill levels.

Transformers: The Birds & The Bumblebees
A series of toys, cartoons, comics, and now live action movie thrillers all about robots from another world that come to earth and hide as cars, trucks, planes, and all kinds of other earthly creations. But where did this phenomenon come from and how did it come to be? Come explore the Japanese and Marvel-ous roots of the Transformers franchise. A seriously humorous look at Japanese and American toy companies working together. [A Manly Battleships® Production]

Gameshow Impossibru™: Where Have I Heard that Voice Before?
The Manly Battleship’s GAMESHOW IMPOSSIBRU™ series continues with a challenge to place that voice! Come test your knowledge of voice over artists in a variety of new, not-new, old, and perhaps even ancient anime. There will be prizes and candy to offset the massive strain on your brains!

Gameshow Impossibru™: Tame That Gaming Tune
The Manly Battleships’ “Tame That Tune” game takes a new turn in this video game based version of the convention classic.  From Atari, to MS-DOS, to Playstation! If you happen to be old enough to remember the good old days, come attempt to guess the origin of all the fabulous music we’ll be playing from the retro game scene!

Japanese Children’s Favorite Stories with Michele Knotz
Fairy Tales. They entertain us as well as teach us. They help us learn and make us smile. They inspire us and broaden our imaginations. Here in the United States we have time-honored stories and fairy tales that children cherish and pass on to their children and their children. In this panel we’re going to take a look at some examples of Japanese children’s favorite stories as we read them to you. This is an audience participation panel. We’re going to call up those who would like to become one of the characters within these beautiful stories and bring them to life. Join us in celebrating the time-honored traditions, values, and enjoyment of these beloved Japanese stories.

Morphsuits! Should I Cosplay That?
This will be a humorous discussion about the fad and how it came about being popular at anime conventions, outdoor events, and parties. Will look at different cosplays of the morphsuits and how everyone can have fun with them.

Before An Unexpected Journey: The Anime Legacy of Rankin/Bass
The trilogies of Peter Jackson are the standard of knowledge for most fans in the Tolkien universe.  But long before An Unexpected Journey, anime played the field when Studio TOPCRAFT made the first offering of Middle Earth on screen. Long passed-over by the regular otaku crowd, our investigative panelists would like to share a story with you of American company Rankin/Bass, TOPCRAFT, Tad Mochinaga, and the magical world called: “Animagic.” [A Manly Battleships® Production]

Michele Knotz and Chris Smith’s Pokémon Nintendo 3DS Party Panel!
Do you like Pokémon? I mean, come on, who doesn’t? So where can you go to get your anything and everything Pokémon fix at your all-time favorite place to be at a convention? A Pokémon Nintendo 3DS Party Panel of course! Join the voice actress for Jessie in Pokémon, Michele Knotz and all-around Pokémon expert Chris Smith for games, fun, contests, prizes, battles, sing-a-longs, and so much more! Trade with other Pokéfans, learn about breeding and battling, and play some awesome fun games for amazing prizes! If you’re a fan of Pokémon, and we know you are, you won’t want to miss this panel! Don’t forget to bring your Nintendo 3DS for special prizes! Finally, a panel where bringing your 3DS is required!

The Art of Cute
Learn the science of making things adorable under a
trained master of all things soft, squishy, and sweet. A fun and
humor-filled drawing workshop with artist Kevin Bolk (I'm My Own
Mascot, Ensign Sue Must Die!). Just try not to get cavities.

Breaching the Hull: A Gundam Introduction and Viewer Guide
Mobile Suit Gundam has a rich history of many alternate universe and era. Where should you begin? Which shows are worth watching? What is a Coordinator and what does it Coordinate? Universal Century fan John and Cosmic Era fan Aaron will help launch your Gundam viewing Three Times Faster than the other Zaku!

​Anime The 1980s in the year 1987
We look back at the 1980s in the years 1987 and some of the great anime that come out that decade. Fist of the North Star, Castle of the Sky, Dragon Ball Z the movie 1, Mobile Suit Gundam,Ranma 1/2 and Urusei Yatsura. We will discuss the impact these anime had on the gene and where they stand 30 years later

DO PANELS: How to Avoid Seppuku and Shaming Your Family
A mix of a helpful informal workshop and a frightful recollection, veteran panelists of the Manly Battleships® show you how things work, how to keep things going in the face of utter disaster, and tell you why there are things you should NOT do when running panels.

Pop-Up Fan Fiction
Bringing your hopes and dreams to life. Have your favorite fan fiction retold in acting, puppets, and weird interpretations. Come and together we'll watch the ships set sail.

Gameshow Impossibru™: Trivia Tycoon
For years the Manly Battleships® have brought the Fleet’s insurmountable trivia to bear against con attendees everywhere. The assault has crushed many a great mind. As the Fleet sails into the local con scene, the mission is: NO MERCY. Recalling the earliest spirit of nerdy trivia, our strategists have developed all-new techniques across every range of the fan community.  Come play the game that will titillate your mind, challenge your intellect, and leave you blubbering in a pool of your own tears muttering: “that’s… IMPOSSIBRU!”